I mean, this is a good enough reason to watch any movie! Anna Kendrick was nothing short of fantastic in Pitch Perfect. I'm so excited that she signed on to reprise her role in the sequel. She said that she signed on before there was even a script - I love that she's passionate about the movie! I can't wait to see what kind of shenanigans her character, Beca, will get into! This is just one of the reasons to get excited for Pitch Perfect 2.

The movie hasn't even started production yet and it's already set for a May 15, 2015 release date. Which means, it'll hit theaters right in time for next summer! I'm glad that they're trying to get the movie out as soon as possible - because trust me, fans greatly appreciate this. I know it's going to great. I wouldn't be surprised if they set some box office records!

Rebel Wilson will be reprising her role as 'Fat Amy' in the Pitch Perfect sequel! This makes me insanely excited because she was easily my favorite character from the movie. I mean, have you seen a more "quotable" character? Everything Fat Amy said in that movie ended up printed on t-shirts! I can't wait to see what hilarious things will be coming out of her mouth next.

I'll be honest, Pitch Perfect made me wish I was a part of an a capella group. I mean, the Barden Bellas were pretty bad-ass. I think it'd be awesome to be in a group like that! I can't wait to see what kind of fun, modern arrangements they sing in the sequel. I hope they do more mash-ups like they did at the end of the first movie. How epic would that be?

Skylar Astin, also known as the major eye candy in Pitch Perfect, will be reprising his role as Beca's love interest, Jesse! I seriously cannot wait to see him back on the big screen. He's become one of my favorite actors! Plus, he's just so easy to look at it. The man is beautiful!

Elizabeth Banks will be reprising her role as Gail (the commentator at the a capella competitions) in the sequel and she'll also be directing the movie! I'm excited to see it all come along because I'm sure she'll make the movie hilarious! The actors have nothing but nice things to say about her.

The first movie was about Beca, an incoming freshman. In the sequel, Beca's a graduating senior! I'm excited to see how the movie will play that out. So far, that's the only Pitch Perfect spoiler I've come to find!

Well, there you have it! These are just seven out of many awesome reasons to get excited for Pitch Perfect 2. Get ready for a whole new soundtrack to get stuck in your head! What are you most looking forward to about the movie? 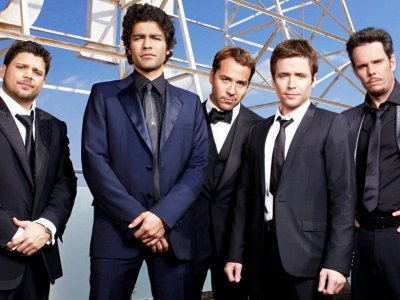